Why wealth and wildlife go hand in hand 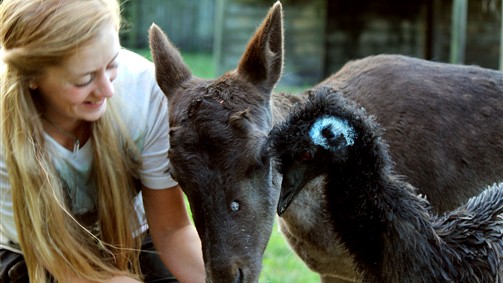 As foxes move into cities and deer, badgers and otters grow ever-more numerous, along with birds such as ospreys, buzzards and red kites, you might be thinking much of Britain’s wildlife is doing well. Yet last week the Zoological Society of London (ZSL), together with the World Wide Fund for Nature (WWF), published their latest assessment of the state of the world’s mammals, birds, reptiles, amphibians and fish: the Living Planet Report 2016. They found that on average populations of such animals declined by about 58 per cent between 1970 and 2012.

The report also provides evidence that while wildlife populations are doing poorly in poor countries, they are generally doing well in rich countries. I spent a happy few hours on virtual safari through the detailed database behind the findings (so I can report that granulated catfish in Paraguay are doing well, while grey-necked picathartes in Cameroon are doing badly), and this pattern emerges clearly.

Take large mammals: throughout Africa the populations of elephants, rhinos, giraffes, lions and many antelopes are in headlong retreat. Throughout Europe the populations of deer, moose, boar, ibex, bear, wolf, beaver, otter and grey seals are booming. The report notes that lynx numbers in Europe have quadrupled over the past 50 years. It is the same in North America. Deer, coyotes, bears and even cougars are growing their numbers, nudecamshd expanding their range and edging into the suburbs, while humpback and grey whales are booming along America’s coasts.

As with mammals, so with many birds. Bald eagles, once teetering on the brink of extinction, have increased so fast that they were taken off the American endangered species list in 2007. Goose numbers have grown so much in both Europe and North America that they have become pests. Cranes are back in Britain after hundreds of years.

The impression that prosperity generally helps wildlife is confirmed by the fact that middle-income countries are in between: wildlife populations have often ceased falling and are beginning to show signs of recovery. China’s giant panda population is rising (although the Yangtze river dolphin is probably extinct); India’s tiger population has inched up in recent years, although its vultures have done badly. Brazil’s Amazon river dolphin is still fairly numerous, although threatened by various risks.

Deer, coyotes, bears and even cougars are growing their numbers

Notice also that in the tropics, large wild animals are increasingly confined to national parks and nature reserves. In Europe and North America even big animals are starting to recolonise areas heavily populated by people. In a suburb of Boston I was warned to watch out for gangs of aggressive turkeys. Bears are turning up in cities. Foxes have moved into British towns. A wolf has been filmed crossing a busy road in the Netherlands. I sometimes see peregrine falcons flying from Westminster Abbey to the Houses of Parliament clutching pigeons in their claws.

In terms of habitats, a similar contrast can be seen. Rich countries are steadily expanding their forests, while poor countries are still chopping them down. All of Europe is getting ever-more thickly wooded, from Scandinavia to the Mediterranean, as satellite images confirm. Britain has doubled its woodland cover in a century and is now as forested as it was in 1750. New England was once mostly farmland; it is now mostly woodland.

The transition from deforestation to reforestation generally seems to happen when a country’s GDP per capita reaches about $4,600 a year in today’s money. Costa Rica went from 75 per cent forest to 25 per cent between the 1940s and 1980s, at which point it passed that threshold and today it is back at over 50 per cent forested. China and India are both now reforesting.

Yet the prevailing theory among environmentalists is that it is affluence that is killing wildlife: that if we lived simpler lives closer to nature we would save more species. Although it is true that some of the demand for the resources of poor countries comes from rich countries, this is not the whole story. Rhinos and elephants are doing badly because of demand for their products from increasingly affluent Asian people, yet much of the pressure on tropical wildlife is domestically generated. Desperately poor people in the Congo rainforest, catching bushmeat for food or for sale for a pittance in a local market, are a greater threat to monkeys than are tycoons on yachts in Monte Carlo.

Indeed, go back tens of thousands of years and the lesson is even clearer. Sparse populations of Stone Age hunter-gatherers, armed with little more than bows and arrows, wiped out a majority of the large mammal species — from mammoths and sabre-tooths to giant sloths and giant kangaroos — within an archaeological eyeblink of arriving on each continent, and with no help from the wealthy, because there were no wealthy. In North America, 45 of 61 large mammal groups went extinct coincident with the arrival of people; in South America 58 of 71; in Australia 17 of 18. The first people likewise devastated the giant lemurs of Madagascar.

The reason rich people are now able to live alongside wildlife in a way that poor people do not is partly because, once liberated from mere subsistence, they can afford to care. Wealth partly decouples the life of human beings from dependence on wild ecosystems. By eating farmed food, moving to cities, using minerals instead of organic materials, we reduce the need to exploit, or compete with, wildlife. This phenomenon is known as sustainable intensification.

So when the ZSL/WWF report blames the consumer society and the intensification of agriculture for the plight of wildlife, as it does, it has it exactly backwards. It argues that global economic growth, while reducing poverty, has resulted in “culturally entrenched aspirations for material consumption” and has gone “beyond what can be supported by the carrying capacity of a single Earth”. Yet if a billion Africans had the high farm yields of Europe, relied less on forests for fuel and materials, and had high living standards, it’s a fair bet that there would be a lot more lions and elephants.