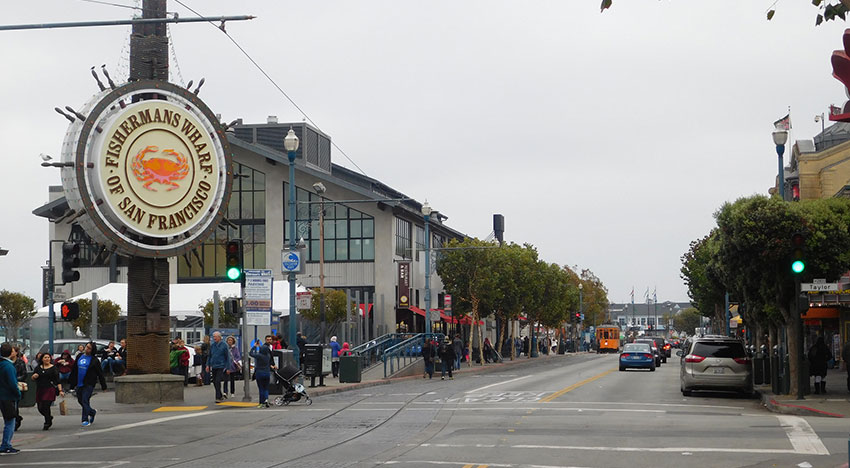 Fisherman’s Wharf is one of San Francisco’s premier tourist spots. There is little doubt that much of what you’ll find in some of Fisherman’s Wharf’s attractions would be classified as tourist traps, but millions of visitors flock here each year anyway. And for good reason. This iconic area of the City by the Bay is where you’ll find entertaining street performers, delicious food, and some unique wildlife that will leave you grinning from ear-to-ear. If you are trying to plan your day, here are several must-see spots in San Francisco’s Fisherman’s Wharf.

It’s hard to visit Fisherman’s Wharf without taking a walk through Pier 39. This is perhaps the area’s epicenter of gift shops, seafood restaurants, and street entertainment. If you’re looking to go for a trip out into the bay, this is probably a good place to find a tour boat. If you want to go on the tour to Alcatraz, you’ll need to walk down to Pier 33.

The sea lion population is the real reason to go to Pier 39. There are hundreds of sea lions that bask in the sun on the west side of the pier and who seem to pose for tourists ready to take just as many photos. There is also a Sea Lion Center on Pier 39 where you can learn more about these delightful creatures and their history in San Francisco.

Aquarium of the Bay

Just next to the Sea Lion Center on Pier 39 is the Aquarium of the Bay. This regional aquarium offers guests a look at local marine life and teaches visitors about conservation. The center has tanks that hold 700,000 gallons of water in addition to approximately 20,000 animals from jellyfish to sharks.

You can find Boudin Bakery’s Flagship location at 160 Jefferson Street in Fisherman’s Wharf. This is the place where bakers have made their famous San Francisco sourdough bread since 1849. Your first stop should be the full-service waterfront restaurant on the building’s top floor, where you can dine on regional favorites and their famous sourdough bread while being treated to some of the best views in San Francisco. From their dining room, you’ll see Alcatraz, Marin, and Angel Island.

After a delicious meal or mid-day snack, walk through the demonstration bakery and then head over to the Bakery Museum for a one-of-a-kind tour. The museum tells the history of Boudin as well as some of the timelines for San Francisco’s growth and development over the past two centuries.

Ghirardelli Square has a history that covers more than three continents and spans more than a century. This retail and dining complex was originally the Domenico “Domingo” Ghirardelli chocolate factory. Today, it is one of the top places to visit in the Fisherman’s Wharf district for its unique shops, eateries, and events.

If you’re interested in touring military ships of time’s past, you’ll want to take a walk down Pier 45. Here, you’ll have your choice between a WWII Liberty ship called the SS Jeremiah O’Brien, and a WWII Balao class Fleet submarine named the USS Pampanito.

At the far end of Fisherman’s Wharf is Hyde Street Pier. This is certainly worth a visit if you love scenic views or are a history buff. At the pier, you’ll find the San Francisco Maritime National Historic Park, which is part of the National Park Service. In addition to exhibits, there are several historic ships here that date back to the 19th century.

All Posts »
PrevPreviousBefore You Backpack: The Worst Hiking Blunders and Ways to Avoid Them
NextThe Grand National – British Horse racing at Its BestNext