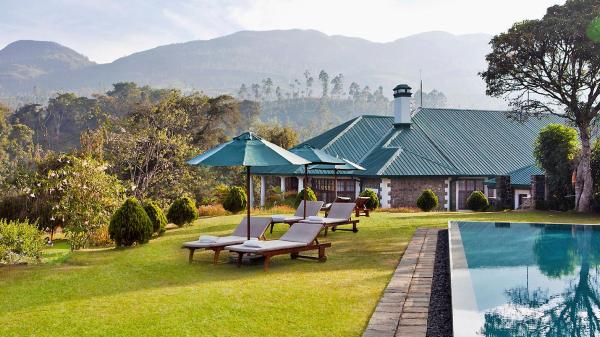 The eyes are unmistakable — green and glinting in the torchlight, they belong to a leopard. It’s a big one, probably a male. Later, from our open truck, we spot paw prints and droppings on the road, although the magnificent beast remains elusive.

I’m on a night-time safari to track the rare Sri Lankan leopard, not in Yala National Park, well known for its sightings, but in hill country, where until now the tea plantations have been the big attraction. Actually, they still are, but leopard safaris are one of the new additions to a stay in this stunning countryside. The best way to see it (and if you are lucky the leopards) is to stay in one of the bungalows where British tea estate managers used to live. They open their doors to tourists who want a taste of colonial luxury, with scenic trails between them so you can easily hike or bike from one to another. This explains why, in the morning sunlight, I’m wandering through a maze of emerald green, with row upon row of tea bushes curving around the hillside. Amid the green, flashes of red, purple and orange catch my eye; women in brightly coloured saris are bent double, picking the tea leaves and flinging them into baskets on their back. This part of Sri Lanka — Bogawantalawa, more than 1,500m above sea level in the Central Highlands, near the town of Hatton — is known as the Golden Valley of Tea.

I’m wallowing in the hot tub, the aches of physical exertion melting away

There are now five bungalows belonging to Ceylon Tea Trails (two more were added this year), all between one and ten miles from each other, each with its own character, a team of helpful staff and no more than six rooms. I’m staying in three of them and having lunch in another; the best thing about these properties is the freedom to roam between them. You could have breakfast at one, then cycle to another for lunch, before kayaking across the lake to a third for afternoon tea. Transportation can also be arranged, and if you stay at more than one bungalow, your bags will be delivered to your room before your arrival. Waymarked trails and maps help you to navigate, or you can book a guide.

My first stay is at Tientsin, the oldest of the bungalows (built in 1888), which transports you back in time as soon as you walk through the door. I am greeted by the strains of 1920s jazz and a butler who offers me a tea mocktail, garnished with tiny, floating strawberry cubes. A chandelier and antique wooden bookcases adorn the hallway, while in the adjoining living room vintage patterned sofas stand invitingly next to a wooden drinks trolley.

“You can help yourself at any time,” says the butler, Bandara, before showing me to the Bretherton suite, named after a former planter. It has high ceilings, a four-poster bed, polished wooden floors, a fireplace and, on the bedside table, a 1933 edition of History of Ceylon. French doors open on to a private garden with views of the hills beyond, and the bathroom features a claw-foot bathtub

Bandara points out the bell by the bedside, which I’m to ring if I need anything from a gin and tonic to shoe polishing. He asks what time I would like to be woken with a cup of “bed tea” in the morning.

I join Wasantha Ial, a guide, on a nine-mile hike from Tientsin to its neighbouring bungalow, Norwood, for lunch. We pass children running along the road in white school uniform, Hindu temples and small villages where Tamil music drifts from open doors. The rust-coloured dirt tracks we follow are the original roads carved by planters more than a century ago, enabling them to cross the tea fields on horseback or on foot.

“Before the British arrived, this landscape would have been thick jungle,” Wasantha says. He explains that leaves plucked at 8am become tea for sale 24 hours later. No wonder each cup I taste has a fresh zinginess to it. I explore the history of tea in greater detail later in my trip, during a fascinating tour of Dunkeld Tea Factory, where I learn how a process little-changed in more than a century produces one of the world’s best teas.

After all that walking, lunch on the veranda at Norwood provides much- needed respite. There is nothing as impersonal as a menu here; instead, at each bungalow I am introduced to the resident chef, who describes the three-course lunch or four-course dinner he has in mind.

I tuck into beetroot and orange salad, king prawns and grilled lamb served with couscous and — instead of mint sauce — a shot glass of peppermint tea. Wines are complimentary and include a good Chilean merlot and Italian pinot grigio. You can dine Sri Lankan-style too; curried prawns, beef, aubergine, pumpkin, banana blossom and dal are served in small dishes alongside rice and poppadoms at dinner, while a plate of noodle-like “string hoppers” is one of many local breakfast options.

After lunch and a much-needed rest, I cycle six miles to my next stop, the Dunkeld bungalow. The most recent addition to the Tea Trails collection (it opened in February), it is also perhaps the most sumptuous. As well as four rooms in the main bungalow and an infinity pool in its manicured grounds, the bungalow has a secluded Owner’s Cottage, with a lavish bedroom, living room, two freestanding baths, a veranda overlooking the lake and — best of all — a private outdoor hot tub. I spend the afternoon wallowing in the tub, feeling the aches of physical exertion melt away. Sipping on cava that had thoughtfully been left to chill in the fridge, I watch clouds scud across the valley as the relaxing hum of insects fills the air.

It’s easy to see why most people come here to unwind, lounging by the pool, playing the odd game of croquet or indulging in a massage, but there’s plenty to explore farther afield. At Kandy’s Temple of the Tooth — a two-hour drive away — I walk barefoot among worshippers offering plates of flowers in front of a gilded stupa said to contain a tooth of the Buddha, snatched from his funeral pyre. The next day I wake at 1am to see the spot where Buddhists believe he left his footprint, at the 2,243m summit of Adam’s Peak.

In peak season the trail would be illuminated, and so thick with pilgrims and tourists undertaking the dawn hike that it could be difficult to move. Yet my guide, Rohan Gunasekara, and I are there in the off-season and have it virtually to ourselves. Following the beam from my head torch, I stride up all 5,200 steps in a zigzag pattern (supposedly it helps to reduce the stress on leg muscles), my heart pounding with the effort, as the rain and wind begin to set in.

It’s hard to imagine elderly pilgrims making such an arduous journey, yet Rohan assures me they do, encouraged by songs from others and the promise of a magical sunrise from the top. When we reach the summit, exhausted but exhilarated, clouds mar the view, but I still leave with a pilgrim’s sense of fulfilment after completing my journey.

My final evening is spent at the Castlereagh bungalow, where my garden suite overlooks the lake, and afternoon tea can be served in a summerhouse. There’s just enough time to climb into a kayak and have a paddle before day surrenders to dusk.

From the water I survey the hills as a pair of white-bellied sea eagles wheel overhead. Then the clouds part and the sun casts a silver sheen over the plantations. I paddle back towards my bungalow and the call of dinner, realising with satisfaction that I’ve glimpsed a side to tea that you don’t see on the packaging.

Need to know
Ellie Ross was a guest of Audley Travel (01993 838335, audleytravel.com), which has an 11-day tour of Sri Lanka, including three nights at Tea Trails (resplendentceylon.com) with a private vehicle and chauffeur/guide and international flights from the UK, from £2,620pp