For his new series, the historian Dan Snow recreated the perilous journey taken by the Klondike gold-rushers. As he discovered, it was a 19th-century lottery that few people won 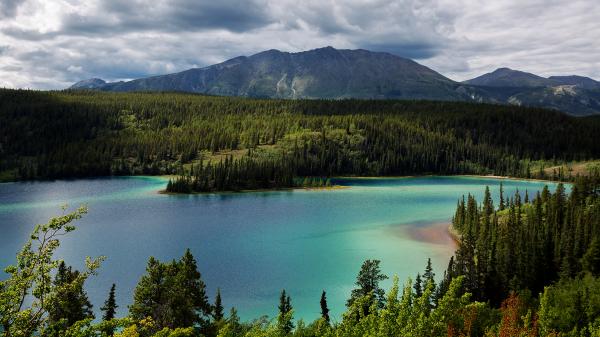 There’s something about exploration in the 19th century. It affords us so many examples of extraordinary, masochistic Victorian gentlemen — and some ladies — who went on the most incredible journeys to fill blank spaces on the map.

The Klondike gold rush was one of these. Like many, I’d heard of it without knowing the exact details. Gold was discovered in this remote corner of Canada in 1896 — and it was big news. More than 100,000 people descended on the area from all over the world, most arriving by boat to Skagway, in Alaska, the gateway for the arduous 600-mile journey to the Klondike goldfields.

Today, the whole journey is replicable, and what is so exciting is the different landscapes through which it passes. There’s a maritime forest environment, there’s glacier, there’s a remarkable river journey down the Yukon. To those who hike through this environment today, the landscape is a beautiful backdrop. To the “stampeders”, as the gold-rushers were known, it was a brutal adversary.

I found a great sense of history pretty much from the off. Despite being a major cruise port, Skagway has maintained its heritage, and it still feels like a gold-rush era, late-19th-century town. Like 99% of those who landed here, we got a boat to the beach at nearby Dyea to begin our journey. Dyea is now a ghost town. You can see the rough outlines, and we had some original diaries to help paint a picture, but it has slowly been reclaimed by nature.

What is now the Chilkoot Trail is the first section the stampeders would have faced. Amid the astonishing beauty, you really get the sense that something globally significant happened here. All around are the personal effects and the equipment that these people were forced to leave behind as they battled the landscape more than 100 years ago. The trail has been described as the world’s longest museum. It’s also been called the “meanest 33 miles of history”.

My team for our journey included Felicity Aston, a polar explorer, and Kevin Fong, a doctor. We were all determined to embrace some of the hardship, while stopping short of that contrived sense of peril that I find tedious in some programmes. We camped out, we hiked with packs and we tackled the “Golden Staircase”. You may have seen those incredible black-and-white photographs of great motorways of people inching up the snowy slopes of this climb. The Canadian government required that stampeders carry a year’s worth of supplies to ensure they wouldn’t starve, so they had to bear unimaginable loads. Most had no experience of the environment. It must have been extraordinarily attritional. We certainly struggled. The feeling of satisfaction of getting to the top, of crossing into Canada, knowing that it was all downhill from there, was huge. For the stampeders, it was anything but.

They had to build their own boats, out of the local timber, to tackle the next stage: the series of lakes flowing north into the Yukon and onwards towards Whitehorse and, ultimately, Dawson and the surrounding goldfields. Most of the boats were flat-bottomed because they were easier to make, even though this made them less stable. We decided to do the same, for authenticity — and also to tackle the mile-long rapids that linked Lindeman and Bennett lakes.

Back then, everyone knew that the good plots were getting hoovered up. So if you got there late, there was almost no point in going. People were willing to roll the dice and take terrible gambles — and tackling these rapids, carrying all your worldly possessions, was one of them. The diaries are full of stories of people getting terribly injured, or even committing suicide after their boats capsized and they lost everything. We got an insight into just how hard it must have been for them when we lost control and hit a rock. I bruised my nose and, thereafter, the boat took the name the Bloody Nose. 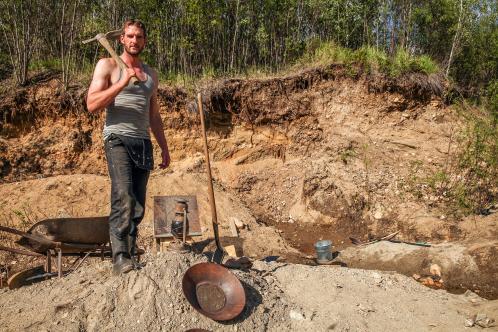 Heading further north on the fast-flowing Yukon, we saw bears, eagles, moose. Journeys are often defined by the people you meet along the way, and we met some remarkable ones. In this part of Canada there’s a whole ecosystem of extremely resourceful types who endure the cold winters and eke out their lives doing a bit of everything: fishing, tracking, back-country ski-guiding. And everyone you meet has done a bit of prospecting — wandering around with a pan, setting up a little sluice.

Around Dawson there’s still a small-scale gold-mining culture. Families don’t farm, they mine. And that means it’s tempting to have a go yourself. I was pessimistic about panning for gold, but I really got into it. The gold fever grips you the minute you enter that place.

Then you encounter the permafrost, just below the surface, and all the other challenges, and you realise what these people — already broken from their journeys — were up against. We found a tiny bit, just £15 worth.

Of the 100,000 who set off, half died or turned back, fewer than 4,000 discovered gold, and only a few hundred became rich. The only way out of the hellish nightmare was finding gold at the end and escaping — yet most got nothing. But isn’t that every gold rush in history, including the modern ones: the dotcom boom, social-media entrepreneurs? The success of the few is the stuff that motivates the masses.

Yet even among the tiny proportion who became wealthy, many deposited all their money down in Seattle or Vancouver, and then headed straight back up north, because this was the world that they were accustomed to and would always be drawn to.

One of the greatest poems about the Klondike gold rush is The Spell of the Yukon, by Robert Service, published in 1907. In it he writes: “I hurled my youth into a grave.” The poem ends: “There’s gold, and it’s haunting and haunting;/ It’s luring me on as of old;/ Yet it isn’t the gold that I’m wanting/ So much as just finding the gold.”

How to tackle the trail yourself

Hike
Klondike Gold Rush National Historical Park, in Alaska, is open year-round, though the best time to visit is May to September. The park is free to enter and rangers offer free guided tours. Permits are required to trek the Chilkoot Trail, with most attempts lasting 3-5 days and hikers staying at pre-booked campsites along the way (permits from £34pp; nps.gov/klgo/index.htm).

Cruise
Various cruise lines have Skagway on their Alaska and Arctic itineraries, with possible excursions including hiking, train rides and helicopter tours to the park. Try Princess (princess.com), Holland America Line (hollandamerica.com), or Norwegian Cruise Line, which has nine-night voyages from Seattle from £2,212pp, and offers a half-day gold-rush- themed Horseback Adventure (from £153pp; ncl.com).

Hike & pan
Nature Tours of Yukon offers six-night trips hiking the Chilkoot Trail (from £1,090pp, including floatplane transfers), as well as various experiences around the Yukon capital, Whitehorse, such as gold-panning and husky-sledding (naturetoursyukon.com).