Chaos looms for holidaymakers as airline risks losing its licence 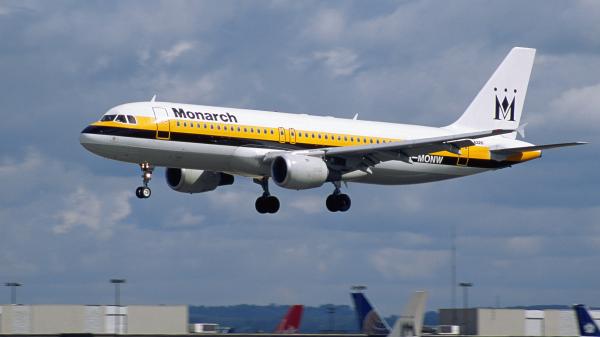 A major airline needs urgently to renew its operating licence to avoid closing this week and causing chaos for hundreds of thousands of holidaymakers.

Monarch Airlines, which carries six million passengers a year, was trying to raise funds yesterday after concerns from the industry regulator. Its licence runs out on Friday.

The Civil Aviation Authority is rumoured to have chartered jets in an emergency contingency operation to fly stranded passengers home. There are likely to be lengthy delays and cancellations if the emergency plans are put in place, and many holidaymakers will be unable to book alternative flights for next month’s school half-term break at 300 pound loan.

Yesterday Monarch played down the threat to its future, saying that it was on the brink of announcing significant new investment that would lead to securing a new CAA licence.

The airline’s current Air Travel Organiser’s Licence will refund the cost of cancelled flights and package holidays that have already been booked.

The CAA refused to comment on “rumours” that it had chartered jets over the weekend to carry Monarch passengers home if the airline suddenly collapses.

The airline is owned by Greybull Capital, a London-based investment firm involved in the controversial collapse of Comet, the high street electronics chain. Greybull recently bought the huge Scunthorpe steelworks.

Monarch employs 2,800 staff, with major operations at Gatwick, Luton, Birmingham and Manchester airports and flies to 30 destinations in Europe and resorts across the Mediterranean.

The airline said: “Over the weekend, there has been negative speculation about Monarch’s financial health. Our flights and holidays are operating as normal, carrying Monarch customers as scheduled.”

Monarch acknowledged that it had been a difficult period for the holiday industry because of terrorist incidents, Brexit and sterling’s devaluation. It said that it expected to make a profit before tax, debt charges and depreciation of £40 million for the year to October and to announce a “significant investment” from existing stakeholders soon.

The airline, which was formed and opened its first hangar at Luton airport in 1968, recorded a £19.2 million pre-tax profit in the 12 months to the end of last October following a £57.3 million loss a year earlier.

A source close to Monarch said it was dismayed that the CAA’s chartering of jets around the world had led to rumours that the airline was close to collapse. “Monarch is financially in pretty good shape,” the source said. “These licence negotiations happen every year.

“[The CAA’s plans] have not been very helpful. They could have unhelpful consequences like a run on a bank following an unfounded rumour.”

A CAA spokesman said: “As a responsible regulator that puts consumers first, we have robust contingency plans for a wide range of potential issues.”

Passengers waiting to board Monarch flights at Gatwick yesterday expressed concern about the airline’s future but said that they hoped that it would survive. Cleopatra Bailey, from London, was flying to Alicante, Spain, where she now lives. “I hadn’t heard anything about their financial situation,” she said. “It does make me feel less safe taking their flights in future. I have a flight booked back in October.”

Lesley Clark, who was also flying to Spain, said: “I will stick with Monarch in future as long as nothing goes wrong. I like their flights — and I like their staff.”

Behind the story: vulture fund willing to do business
It is one of those faceless international investment houses based in Belgravia that are peopled by tanned young men and women who speak in mid-Atlantic English and quote ebitda figures and returns on capital employed (Robert Lea writes).

Greybull Capital is not so different from many others — its plush offices are above Jimmy Choo on Sloane Street — except that it has had to put its head further above the parapet than most recently after its acquisition of Tata Steel’s sprawling steelworks in Scunthorpe.

Greybull is run by brothers Marc and Nathaniel Meyohas and their friend Richard Perlhagen. It has a reputation as a vulture fund, the sort of investor that comes to feed when a business’s fortunes are down.

It was among the investors when it looked as though Comet, the electrical chain, might be rescued. It took out its money as Comet went into administration with the loss of 7,000 jobs. It was involved in the turnaround of Game Group, the computer games retailer, but also in the failure of Rileys sports bars.

It likes to style itself as a finance house that is willing to invest in British business if terms are right. It came in when Monarch’s owners wanted out and at Scunthorpe 4,500 staff are relying on Greybull, with thousands more in the supply chain.