Air travellers must leave bags behind in emergency 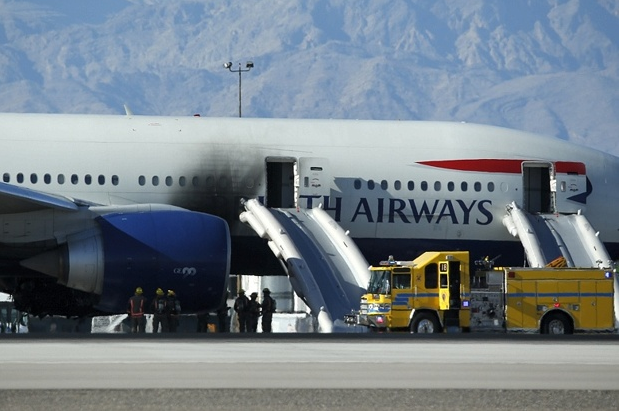 Air travellers will be banned from taking hand luggage off planes during emergency evacuations amid claims that growing numbers of “selfish” passengers are endangering lives.

Cabin crew have been instructed to issue verbal warnings to passengers and even forcibly remove their bags at the exit to clear aircraft as quickly as possible.

The Civil Aviation Authority has also told airlines to update pre-flight safety briefings to make sure that travellers are given clear instructions about the importance of leaving hand luggage behind during an emergency.

The warning comes after dozens of passengers were seen fleeing from a fire on a British Airways aircraft last month carrying wheeled luggage, backpacks, hand bags and even shopping.

Passengers were condemned for stopping to pick up bags from overhead lockers before jumping down emergency chutes when the Boeing 777 went up in flames on the runway at Las Vegas airport.

The CAA said that the problem was much more widespread, with a large number of passengers regularly mirroring behaviour seen in Las Vegas — potentially blocking exits and risking the lives of other travellers.

A CAA safety notice, which was issued to airlines yesterday, said: “Evidence from evacuations of aeroplanes since 2013 has shown that significant numbers of passengers attempt to take hand baggage with them when evacuating an aircraft. Such passenger behaviour can present a significant hindrance to egress, injury to other passengers and damage to evacuation slides.”

The warning, which British airlines must observe, said that operators should review the content of pre-flight safety briefings and cards placed in seat pockets to “ensure that clear instructions to leave hand baggage behind in the event of an evacuation” are made.

It said that airlines should also update procedures for managing evacuations, including “verbal instructions . . . and actions to be taken by cabin crew should passengers attempt to remove hand baggage”. Crew members should be told to challenge passengers “with hand baggage at exits in order to maintain expediency of egress” while ensuring this intervention “does not hinder evacuation”, the document said.

Captain Brendan O’Neal, chairman of the British Airline Pilots’ Association, welcomed the move, adding: “In a serious emergency such as a fire, all passengers and crew need to get off the aircraft as quickly as possible and the target is to evacuate in 90 seconds.

“Failing to follow the instructions of the crew by stopping to collect luggage is extremely dangerous as it slows down the evacuation, could block aisles and prevent passengers getting off in time and could cause injuries.”

Nathan Stower, from the British Air Transport Association, said: “Whether you are a regular flyer or it’s your very first time, airlines ask passengers to pay attention to safety presentations which stipulate clearly that all personal possessions should be left behind in the event of an emergency evacuation.”